It could be a gas card, a mortgage payment or an electric bill. For some, these expenses might not be a big deal, but for others, they can make a huge difference.

The Argus Foundation member Keith Mercier of Bouchard Insurance has been on the Payton Wright Foundation board since 2012. He knows the impact a gas card can make on a family traveling daily to a hospital where their child is receiving treatment for pediatric brain cancer, now the No. 1 killer of children other than car accidents.

The foundation was established in 2008 by Patrick and Holly Wright to honor the memory of their daughter, Payton, who passed away from brain cancer at the age of five. “It’s great how Argus members have responded to my involvement in the Payton Wright Foundation,” Keith said. “They are so supportive.”

Keith promotes the foundation’s annual golf outing with Argus members, along with the Payton Wright Foundation’s other fundraising events, like an evening with performance painter Michael Israel at the Hyatt on Oct. 3.

The foundation helps families in the United States, and now in Toronto, where Keith recently visited The Hospital for Sick Children. There, Keith saw firsthand how crucial the work of the foundation really is and how cancer has no boundaries.

Social workers and pediatric neuro-oncologists at the hospitals are key to the Payton Wright Foundation’s work. They come to the foundation directly with news about families that might need financial help.

“Parents drop everything when they get the news that their child has pediatric brain cancer,” Patrick said. “Usually one or both parents have to quit their job or take a leave of absence. We allow parents to focus on their kids and not on the finances. We give them one less thing to think about when they’re going through this.” 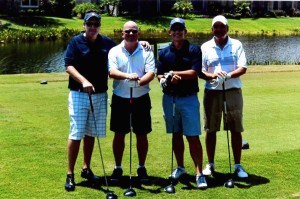 The foundation has even paid some families’ mortgages for a year. And if a hospital calls and tells Patrick that a family’s electricity is going to be cut off, he gets on the phone right away and makes sure the bill is paid that day.

Many of these measures of support are funded by members of the local community.

“What this community does to support us is phenomenal,” Patrick said. “Our donations range from little girls who have done a lemonade stand and give us $10 in quarters to single donations in the tens of thousands.”

Keith and several other Argus members have offered their personal support because of how strongly they believe in the foundation’s mission.

“To me the culture of Argus is giving back to the community,” Keith said. “There isn’t a member of Argus who isn’t involved in the community, and you can go member by member and see how they give back. It always amazes me.”