The weather was a little warm for chili, but that didn’t stop thousands of people from gathering on Osprey Avenue on Oct. 16 to sample 15 different chili concoctions at Morton’s Gourmet Market’s 17th Annual Chili Cook-Off. The event, which benefits the Sarasota Fire Fighters Benevolent Fund, features firefighter cooking teams from throughout Sarasota County and beyond.

Argus Foundation board member Todd Morton has been a co-chair of the event since the beginning.

“It’s grown over the course of the years, and it’s certainly a labor of love,” Morton said. “It’s not just a neighborhood event – it’s a great community event.”

Morton said on the day of the cook-off, they start setting up at 7 a.m., way before the 2 p.m. start time. He makes sure the firefighters have what they need and that everything is in place.

He organizes and runs the event with fellow co-chairs Jay Riley and Ryan Jekonski. Jekonski, a firefighter and Sarasota Fire Fighters Benevolent Fund board member, said the celebrity judges grade the chili on five different categories, like taste, originality and consistency.

The firefighter teams all make around 25 gallons of chili, passing out samples to ticket holders throughout 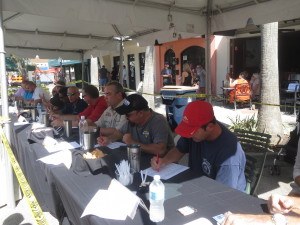 “Each team has about four to eight people on it,” Jekonski said. “Everybody on the team will do something, from serving to cooking to building the booth.”

Walking around the two-block event, it’s clear a lot of effort goes into winning the best booth award, with firehouse teams going all out to decorate their space in a variety of themes, from TV Land to Bourbon Street Chili to Make Chili Great Again.

While eventgoers visited each booth to get their sample, people listened to the Daisy Dukes Band and enjoyed lemonade, ice tea and beer when the chili just got too hot. 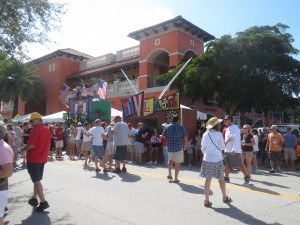 In addition to the judges’ prizes, there is also a coveted people’s choice award, voted on by anyone sampling chili who casts a ballot for their favorite.

This year, the winner of best chili and people’s choice was Southern Manatee Fire and Rescue for their “Haz-Mat Chili.” The best booth award went to Sarasota County Station 1, A Shift for their TV Land booth. 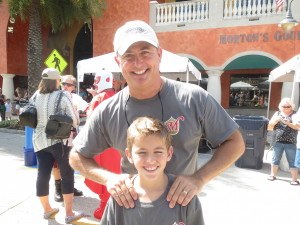 various other community initiatives, including helping people whose houses have burned down.

“I always enjoy working with the firefighters,” Morton said. “They’re great people and their hearts are in the right place.”